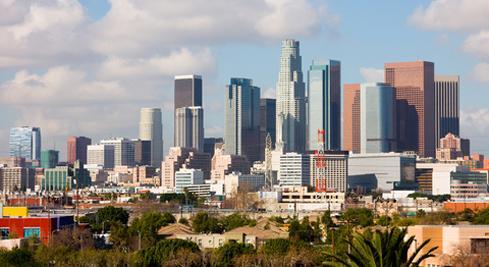 Home to 18.55 million people across 5 counties, a large population in the LA area drives significant demand for local manufacturing and truck transportation throughout the region. Surprisingly, 42% of all goods produced in California are shipped only within 50 miles of their origin. This built-in consumer market for goods like clothing, furniture, metal arts, and food products easily keeps local producers in business. Of course, greater Los Angeles manufacturing facilities do not exist to solely meet the demands of the citizens. There is strong demand for southern California produced goods in other US states, Canada, and all over the world, predominantly in the aerospace industry.

A staggering 80% of the world’s aerospace fasteners - nuts, bolts, etc - are manufactured in the Los Angeles area. This is mostly because of the wide open spaces and moderate climate favorable for year-round aircraft testing. Big names like Boeing and SpaceX have based their operations out of Los Angeles for these very reasons. Additionally, as a port city LA provides easy access to globally imported raw materials which further assist in manufacturing.

Over $1 billion worth of goods are transported daily through the ports of Long Beach and Los Angeles. Cargo ships from Asia carrying mainly electronic components, furniture, and auto parts are continuously arriving at the ports where the containers are stacked on top of one another, awaiting distribution by rail or truck.

LA’s well established and nearby land transportation network, often referred to as the “Inland Empire”, allows for quick and easy distribution of freight throughout the USA and fast trucking from Los Angeles to Canada or Mexico.

Speaking of Canada, Southern California is actually one of its largest trading partners. In 2014 bilateral trade between the two amounted to $46 billion, with $18.2 billion worth of products exporting directly from Los Angeles. Impressively this accounts for only 10% of the city’s foreign bound manufactured goods.

On an international scale, the region's economy rivals that of many entire countries, ranking 16th in the world. Easy access to a global marketplace and a huge built in demand means Los Angeles is sure to remain one of the strongest manufacturing hubs in the United States and the world, for years to come.

Connect to a 13 Terminal Network

Get your LTL rates faster for shipments moving within our 13 terminal regions. Obtain an accurate market-leading freight quote in real time from the CSA website with a client login. Ask your account representative today!