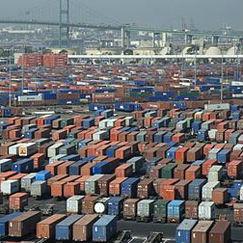 There are currently 360 shipping ports in the USA and 550 port facilities serving Canada. Massive trade routes bring in millions of twenty-foot equivalent units (TEUs) each year, and the major U.S./Canadian shipping ports have been expanding rapidly in the past century.

Container freight imports have a significant impact on LTL pallet shipping businesses and for over three decades, CSA's LTL network has helped distribute a portion of the freight that enters through the major ports in Canada and the USA.

For this reason, many of our terminals are located near the largest seaports in the US and Canada.

Let’s go over some of the biggest seaports in the USA and Canada below.

Located on the West Coast of the country, the Port of Los Angeles is the single biggest port in the USA. Last year, it moved more than 9.3 million TEUs, an awe-inspiring number even by global standards.

The port stretches for more than 43 miles along the coast, taking up almost 8,000 acres of land. The sheer size and efficiency of the port have cemented its spot at the top of the biggest ports in the US list for the past two decades. CSA's distribution center in greater Los Angeles continues to help importers bring their products to market.

Supported by an intricate network of rail lines and interstate highways, the port takes care of more than 76 million metric tonnes of the nation’s total cargo. This translates to over $40 billion in annual import and export goods.

The Port of New York and New Jersey comes fourth on the list of the busiest ports in the US and the second-largest on the East Coast.

Last year, it carried almost 3.8 million TEUs, an impressive number by any measure. The port has recently launched an ambitious plan to improve its ability to handle the largest ships quickly, and that could help it climb the ladder of the largest ports in the US. CSA's nearby distribution hub is ready to assist!

We’re proud to have a regional distribution centre located near Quebec’s most extensive and Canada’s second-largest port in Montreal. Situated on the Saint Lawrence river seaway, this port sits on the shortest direct trade route between the Mediterranean, Europe, and North America.

The port of Montreal is seen as one of the most innovative ports in the world, harnessing AI driven intelligence to forecast the best times for drivers to drop off and pick up their containers. The port recently received funding for a fifth terminal, which will see its annual capacity rise to 2.1 million TEUs, with cargo tonnage of over 35 million metric tonnes.

The Port of Savannah, Georgia, is one of the busiest port cities in the US and ranks in the world’s top 40 busiest ports. With estimated traffic of over 4.35 million TEU per annum, Savannah houses the largest single-terminal container facility in Western Hemisphere.

At CSA, we understand the importance of finding the fastest most cost effective transit for your shipments. Over the last 34 years, we developed a proven system for ensuring that the supply chains keep moving without a hitch, no matter where you need your shipment to go.

CSA has shipping centers at major North American ports, including hubs in Los Angeles, New York / New Jersey, Vancouver, Montreal, and an Atlanta trucking terminal that correspond to the locations mentioned above. Because of our vast network of strategically location distribution centers we can provide you with reliable transportation throughout Canada and the USA no matter what happens.

If there’s a shipping strike or another issue at one of the largest shipping ports in the US, you can redirect to a different port on the West Coast and use CSA's distribution network to bring your freight back into it's original destination. For instance, if a strike happens in Los Angeles, you can reroute your cargo to Seattle, San Francisco, or other alternatives and CSA's trucking network can take it from there.

In many cases the fastest way to transport your goods from China is to ship it to the most northern pacific port. For instance, shipping to Vancouver from China makes more sense if you need to deliver to Canada, as the shipping transit days is shorter. Once your freight arrives in Vancouver CSA can help you with pallet delivery to your customers.
To learn more about our services, request a quote today. We’ll be able to answer any questions you might have regarding the particular details of your shipment.

Connect to a 13 Terminal Network

Get your LTL rates faster for shipments moving within our 13 terminal regions. Obtain an accurate market-leading freight quote in real time from the CSA website with a client login. Ask your account representative today!